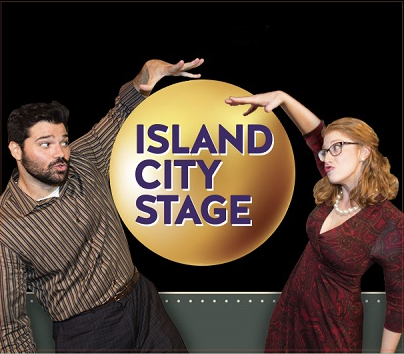 Important Information on How It Works
These are tickets for the online streaming version of these shows. Once you purchase your ticket, you will receive an email, along with a text, with your link to watch at the scheduled time. Tickets are non-refundable.

Right now, the world needs a drinking buddy, and there’s no one more qualified for the job than Alabama’s favorite daughter, Dixie Longate – a gal who’s never too far away from a cocktail.  Island City Stage invites you to join Dixie for this uproariously raucous 80-minute joyride where Dixie will serve the four basic food groups: gin, rum, vodka and tequila.
Island City Stage Holiday Spectacular
Streaming December 10 to December 18, 2020

Island City Stage celebrates the holiday season with an ode to the old TV variety specials hosted by stars like Andy Williams, Bob Hope and Cher. The Island City Stage Holiday Spectacular is hosted by Carbonell award-winning playwright and actor Michael McKeever and will feature songs of the season sung by performers from many of your favorite Island City Stage productions. This online-only production will bring joy and cheer into your home as you sip a cup of hot cocoa next to your Christmas tree and/or menorah.
Compensation
Streaming February 12th - February 21st, 2021

Tara, a young, lonely woman, drops out of college unbeknownst to her mother and becomes a surrogate for Gabriel and Elliott, a well-established gay couple. Suddenly, Tara finds herself carrying not only their future child, but a terrible secret as well. Compensation is a dialogue about the complex systems that coerce women into outsourcing their bodies for income, the ethical implications of men purchasing access to those bodies, and the profound yearning for family that drives these people to entangle themselves in these systems in the first place.
The Niceties
Streaming April 15th to April 25th, 2021

The office of a white, liberal, lesbian history professor at an elite ivy league university explodes with conflict when a black student arrives to discuss the thesis of her essay: “A successful American Revolution was only possible because of the existence of slavery”.  What begins as a polite clash in perspectives ignites into an urgent debate about race, history, and power.

It’s celebration time in this hilarious one-man comedy as Josh and Brennan are about to get married in Palm Springs on a lovely Saturday afternoon. However, the night before becomes a drunken, drug-fueled riot, because their friend Gerry has arrived, furious that their invitation says “Please refrain from wearing bright colors or bold patterns.”
​Whichever way you see him- as either your ideal or your worst nightmare wedding guest — Jerry is overwhelming in real life, but also a raucous delight.

These are tickets for the online streaming version of these shows. Once you purchase your ticket, you will receive an email, along with a text, with your link to watch at the scheduled time. Tickets are non-refundable.

Already purchased tickets and can’t find your links to watch? Look them up here and we’ll send you a new one.